Researchers at the University of Toronto have made the rarest of discoveries — they’ve found a trace of collagen and iron-rich proteins inside the fossilized rib of an ancient herbivore called a Lufengosaurus.

The Lufengosaurus was a long-necked dinosaur that once thrived in the early Jurassic period in a region of China. To date, finding any organic remnants in dinosaur fossils has been a rare and remarkable event. Organic materials usually decompose quickly in geologic terms (50 to 100 years). But the remnants of the proteins discovered in the dinosaur bone of the Lufengosaurus were over one-hundred-and-ninety-five million years old!

Scientists believe blood vessels in the rib possibly formed a “closed micro-sized chamber,” allowing the evidence of proteins to endure, eventually becoming detectable to infrared spectroscopy analysis. Using a synchrotron machine (which bounces light beams off the fossil), scientists can examine the remains of organic material residing within bones without having to physically dissolve away portions of the fossil to gain access to otherwise hidden structures. 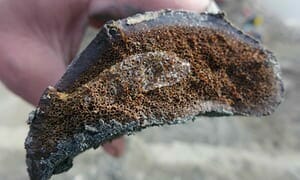 Now, at long last, scientists don’t have to partially destroy the fossil to master its secrets. Researchers hope the continued use of infrared spectroscopy analysis might one day let them better understand the accelerated forces that created one of the most startling and mysterious transformations in earth’s history — the evolution of the dinosaurs into modern day birds!