In recent news, Boeing put forth a patent that many organisations are calling a “Force Field”. Now before you get too excited, thinking about how we are one step closer to Star Trek let's take a look at a few things. First, Boeing is not calling this technology patent a force field. With no real working name yet the system is described as “Method and System For Shockwave attenuation via electromagnetic arc”. By taking a closer look at some of the features of today's defensive technologies, we can begin to see just how close this tech is to Trek.

It seems that Star Trek style shielding like is not only a long way off but it is unlikely that we ever will develop this style of shielding. The primary limitation is simply the power demand that such a system would require. Scientist and engineers have realised that to create a passive impenetrable shield like the ones seen on the starship Enterprise we would need a tremendous and constant supply of energy.

This is the reason why today's defense systems are instead active response technology. This technology utilizes brief barriers of defense without the need to haul a giant generator along with you everywhere you go. The concept is much like airbags for your car. Instead of driving around encased in a giant protective bubble. The system only deploys when an incoming attack is detected.

What is a Force Field?

In the realm of science fiction force fields we will keep it simple and use Star Trek ships defensive shielding as an example. The shields of the Enterprise envelop the vessel in a bubble of impenetrable projected force. So, when the shields are up, neither energy nor matter can pass through them. This is the reason why when the crew need to use the transporters they have to lower the shields.

The force fields that Boeing is proposing would only activate when an incoming attack would be detected. Unlike Deflector shields this force field is not a solid shield so any direct attacks against the vehicle would be unable to stopped by this device. Boeing is proposing developing shielding that could defend against near misses that result in shockwaves or explosive force close to the vehicle.

The proposed system would would detect an incoming shockwave and instantly activate. The units power systems would send out a signal to the force field that would then super heat the surrounding atmosphere near the vehicle. This would in turn result in the production of a plasma-like medium that would act as a shield and buffer the vehicle and its occupants from the incoming explosive forces and shockwaves.

Other Force Fields In Development?

There are several other companies and countries there that are currently working on force field technology. The one that stands out to be the most Star Trek-like is the British military’s Defense Science and Technology Laboratory research into supercharged electromagnetic deflector fields.

This proven system uses supercapacitors to release huge stores of energy to deflect nearly anything up to the size of a small missile. This system is tested but has not yet been perfected. In time they feel that this technology will be able to replace the need for today's conventional  heavy armor. This system while having been tested and a proven technology since 2002 still falls short of Trek levels of protection. It is able to deflect the attack but crew of the vehicles remain vulnerable to shockwaves and explosive force.

In Israel a system called “Trophy” has been on active deployment in battlefield since 2011. Unlike an energy force field, Trophy deploys shotgun like projectiles to intercept incoming attacks and neutralize the threat. Additionally, as if straight out of Star Trek Trophy is able to detect where the attack came from and relay that information to the crew in real time. 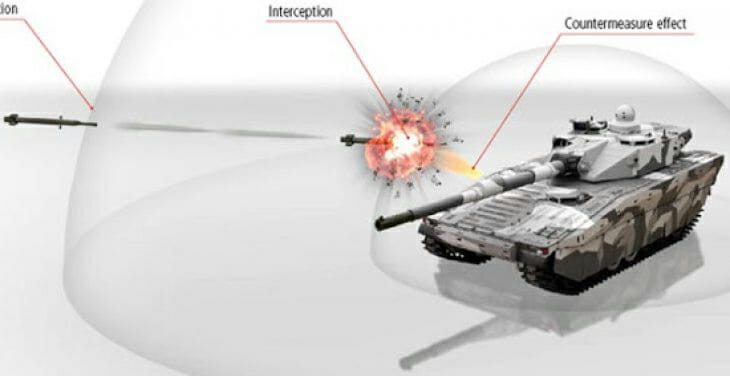 How Far Off Are We?

While it seems that we are not moving in the direction of Trek force field by design. If Boeing is able to perfect their electromagnetic arc and this system were to be combined with a partner system like that of Trophy or Britain's deflector shield. The result would be as close to Star Trek as we likely will see in the near future with the added benefit of no need for a heavy bulky power supply.

The resulting combination system would intercept and destroy incoming attacks and then create a plasma wall to counter the shockwave. At the same time relaying real time information to the direction of the attack so the crew could quickly neutralize their attacker.

This system would have one up on Star Trek as it would be a active defense system and the “Shields” would not need to be raised for combat. They would always be active and ready to protect the vessel at all times. That sounds to me like a shield that Captain Kirk would love to have on the Enterprise.