It’s hard to believe that in the entire time we have been able to go into space that only 533 people have ever looked down at our planet from earth’s orbit. Yet, in the next few years all of that is about to change as after years of testing and preparation. Several companies are on the verge of making space vacationing a real thing.

Earlier this year Orion Span, a startup space company, announced that they planned to launch into orbit the very first “Space Hotel”. It will be positioned in low earth orbit and the company estimates that they will be ready to begin the project in 2021 and would open in the following year.

With that announcement, fans of science fiction all over the world had visions of standing on the promenade staring out at the stars as they hurtle through space. While a view that impressive may be far off, it’s apparent that we are quickly approaching an age where civilians will soon be able to visit space as tourists for a brief time before they return to our beautiful blue marble in the blackness of space. So, what will it be like to take a vacation in space and who will be able to go?

So, You Want to Take a Vacation In Space?

As wonderful as it would be to allow anyone that wants to get their Star Trek on, there are a few factors that keep it from being accessible to everyone for now. What needs to happen before this experience is attainable by the majority?

Now, if you want to count yourself among the ranks of the very few that have slipped the bonds of earth to drift in space you are going to need to prepare, as well as be willing to spend a huge amount of money. It is, by almost anyone’s standards, very expensive to send a person into space. Currently, there are several hundred people that have already paid $200-$250 thousand dollars each for tickets to travel into space.

Two hundred thousand dollars is just the price to travel into space. If you want to spend a vacation in the big black you will need to spend considerably more. A twelve day stay aboard the Aurora Station, the above-mentioned luxury hotel in space, will come with a ticket cost at around $9.5 million dollars. A trip aboard a rocket trip to the International Space Station currently has a $40 million-dollar price tag.

Now, before you fear that only the rich will ever be able to afford to get to space consider the natural progression of technologies.  We are now in the early stages where many private enterprises are getting into the industry. As competition increases and as more investment is injected, the cost will come down significantly, as with all tech.

Physical Fitness is a Must

As space travel becomes cheaper and more efficient, there are things beyond cost that you will need to consider before you are able to take a trip to the stars. Anyone who desires to take trip 62 miles straight up will need to meet a certain level of physical fitness. Other than that, there likely will be a screening process that will for safety reasons disqualify someone who is not medically able to handle the rigors of space and the journey to it.

What to Expect While on a Space Vacation

So, you can afford to head to space and your fit enough to go, what can you expect to see or do while you are there? Here is where we go from what we know to what we have been told we can expect. First off, space vacations are in their infancy. So we’re not quite yet living like the Jetsons. That said, the 12-day experience will still be an amazing one.

Remember we mentioned that image of standing on the promenade and looking out at the stars. Well, aboard the Aurora Station that would be something that you could do. Now granted, the whole Station could fit inside the promenade of DS9 but we must start somewhere.

The Aurora is just over 43 feet long and 14 feet wide. It will be the 12-day home to 4 vacationers and its crew. The room might be tight, but the view is out of this world. While on the station vacationers will experience 16 out of this world sunrises and sunsets every day! As well as regular treats of the polar auroras that the station is named after. 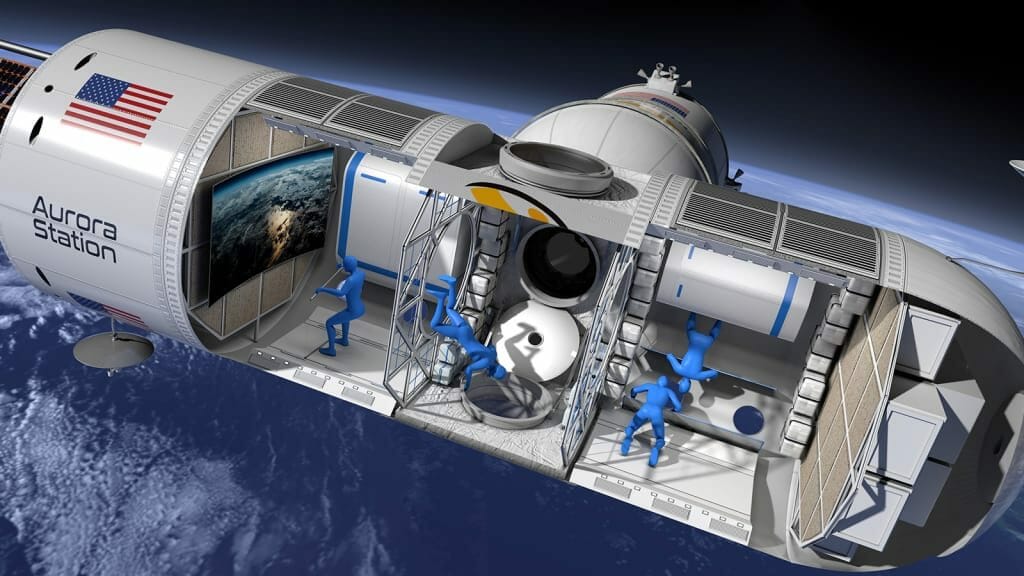 If somehow the view gets boring for you during your trip the Aurora has something for the sci fi lover in you. What space station would be complete without its very own holodeck? That’s right, straight out of Star Trek, the Aurora will have its very own zero G virtual reality platform! When it comes time to return to mother earth the vacationers will also be treated to a hero’s welcome home experience.

So, the only question left is, will you be booking a trip?