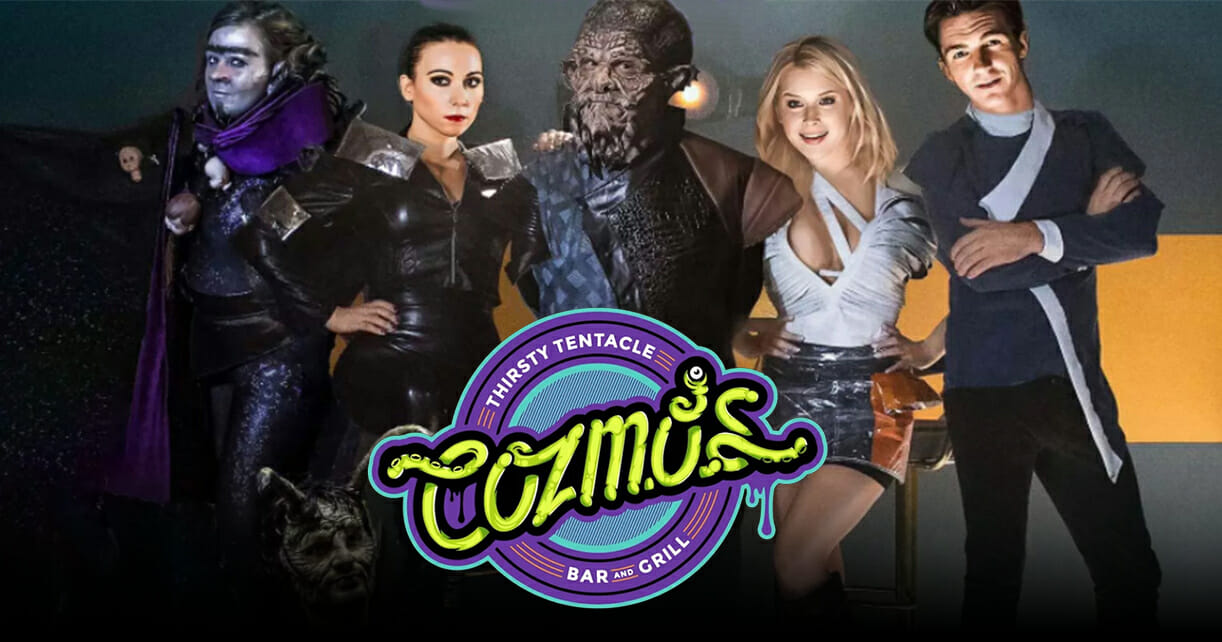 A groundbreaking, original premise that can be best described as Twilight Zone meets the Star Wars’ Cantina, with an anthology embedded in the premise. Set in a “crossroads bar” on an alien planet that’s on the edge of a galactic war zone with a cast full of far-out characters including intergalactic spies, smugglers, bounty hunters, and even an interplanetary madam.

At Cozmo’s humans are the new species on the block and are the butt of all the jokes. The series main cast will feature Cozmo (Ethan Phillips), a good-natured four tentacled bartender, Ken (Drake Bell), his wet behind the ears human assistant, and Kallie (Renee Olstead), a beautiful, street-smart waitress. Along with a host of regular and new patrons, they will share their far-flung adventures, stories, romantic endeavors, business ventures, and antics. The series will feature original art design by legendary Star Wars artist Ralph Mac Quarrie.

In Cozmo’s Thirsty Tentacle Bar & Grill, the seediest dive this side of Arcturus, naive human bartender Ken McCormack listens to strange stories all day. While two bulbous-headed aliens tell him of their past encounters with some backwoods Earthlings, Ken inadvertently starts a war with an invading race of cockroaches. Now it’s up to Ken and his four-tentacled boss Cozmo (with the help of Majestica, the madam of The Sensual Tentacle) to stop the horde before they lay waste to the bar and everything around it.

Currently in production. Check back soon for more information.

The good-natured four-tentacled bartender COZMO has been there for years, almost always behind the bar – in fact, people wonder if he ever leaves. From his station, though, Cozmo can use his flexible tentacles like bullwhips to snatch away empty glasses or to smack unruly customers on the back of the head to get them to settle down.
He is wise, calm, and unflappable (as a good bartender should be), and he is always amused by humans and their foibles, the strange assumptions they make, the embarrassing messes they get themselves into. A sign above the door to his Thirsty Tentacle Bar & Grill proclaims, “Yes, we serve humans!” which he considers a wonderful double entendre. Cozmo always thought he had infinite patience, though his new assistant is straining him to the limits. 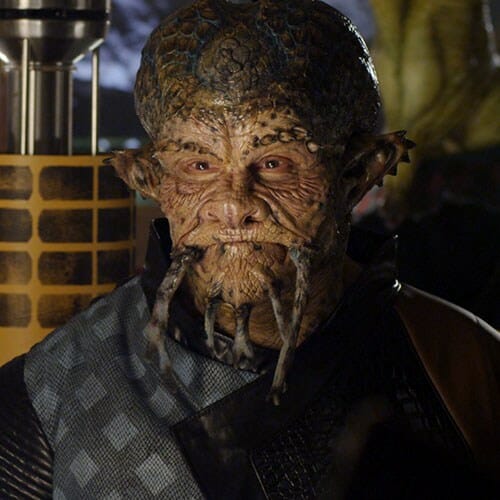 SLOANIK is an alien con artist and peddler who will try to sell anything to anyone. Cozmo has little patience for him, but since he buys drinks for some of the customers, Cozmo keeps him around. He’s been known to actually have something of value to sell, but not very often. Sloanik’s persistence often brings on the wrath of some of the customers, but he seems to know just when to quit. 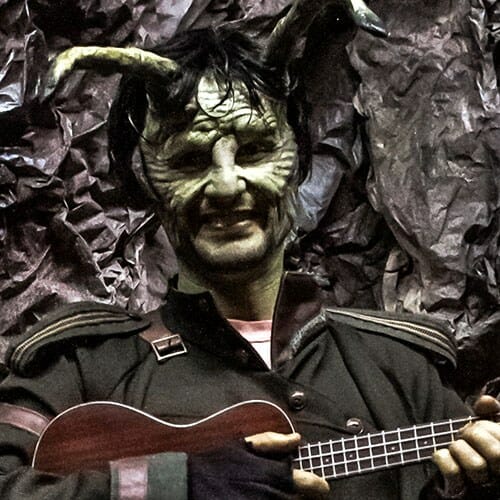 Kennedy McCormack, played by Drake Bell, is the fresh-faced and eager new employee at the bar. Away from the home planet for the first time in his life, Ken is wide-eyed at everything he sees, anxious to experience all the galaxy has to offer. He has left family on Earth, and his mother often sends him care packages of treats, which the alien customers find embarrassing or disgusting.

Ken has been hired as a bartender-in-training to mix drinks and serve all species. He is having a difficult time memorizing all the different drinks and beverages, as well as the warning restrictions as to which various aliens prefer drinks that are chemically incompatible (with disastrous potential consequences). Ken is somewhat gullible and wet behind the ears, but he will stick up for himself.

Humans are the new kids on the galactic block. As wide-eyed youngsters in the clup of spacefaring species, we are viewed as the “Irish of the galaxy” – provincial, quaint, somewhat rowdy, a bit too big for our britches… though we don’t quite realize it. Shown with a liberal does of irony, the humans of often snickered at, yet we always manage to persevere. Since humans are the constant butt of alien jokes, Ken McCormack often finds himself in a scuffle. 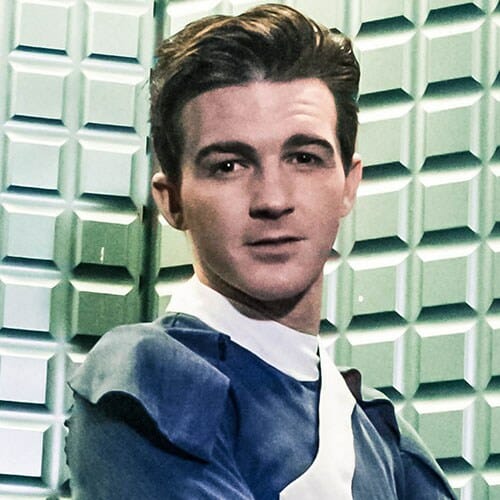 MAJESTICA, played by Claudia Chrisitan,  is a silver-haired humanoid with a gorgeous fluffy tail, like a squirrel’s, which she wraps around her shoulders like a feather boa; she can also use it to surprise effect in certain instances. She is the Madame of the “Sensual Tentacle,” and she prides herself in having a variety of species in her employ, including humans. Her establishment is well-respected and a popular stopping spot for customers of discerning tastes.

Majestica herself comes out and mixes with the patrons or talks with Cozmo, considering it a good business practice. She used to be hot stuff on the galactic entertainment circuit, but now she’s a tough businesswoman who knows how to negotiate and how to keep the customers happy.

As a running joke, Majestica seems to know everybody who comes through Cozmo’s. Ken begins to wonder if there is any important person of any race that she doesn’t consider an “old friend.” She is cool and motherly, knowing just how to smooth over problems, unruffle feathers (or other appendages), and keep everybody happy. 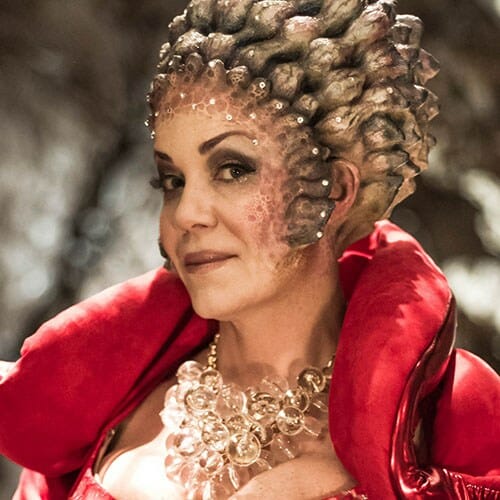 Little is known about the mysterious Edwina, one of Cozmo’s most boisterous and electric regulars. Some believe she’s on the run from the law. Others have suggested that she’s a hobo who has refashioned herself as a social media diva. But most simply don’t care, and would rather focus on beer and peanuts. Edwina is played by Che-Landon. 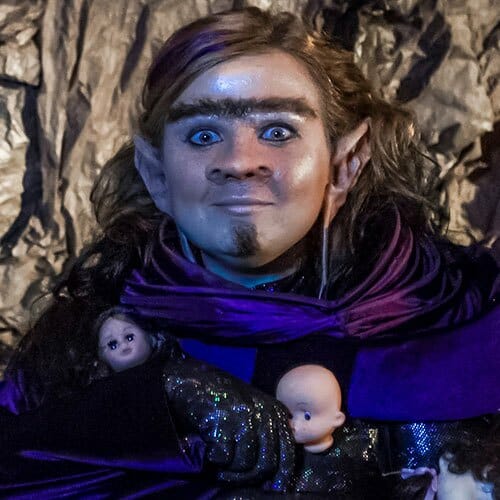 The female lead is Kallie Morne, a beautiful cocktail waitress who is friendly and compassionate, but doesn’t take crap from anyone. Once, when a frisky alien pinches her, she turns to him and says, “I know the most vulnerable areas on over ninety recorded species. Would you like me to demonstrate on you?”

Raised on a rugged colony world, Kallie has come to Cozmo’s to work her way up to a better place. Her parents are colonists living a hard life in a tough environment, and Kallie sees her job at the spaceport as her escape. Her parents have agreed that Kallie could have three years to prove herself. If she can’t succeed on her own by then, she has promised to return to the colony world. Kallie intends to beat the odds, though. 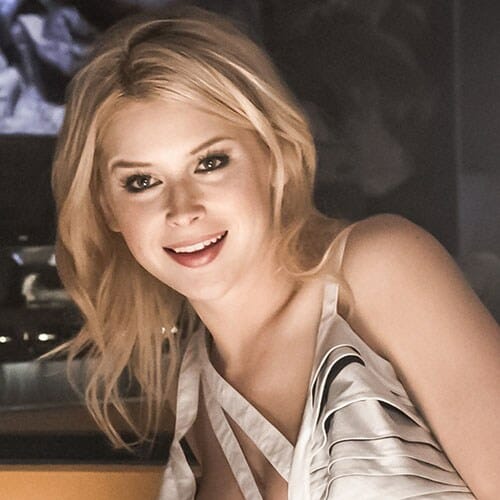 Sheen, played by Jane Tanna, is an alien assassin who strikes fear in everyone in the bar, except maybe for Cozmo. They have a past, but neither one will talk about it. Sheen is lithe and athletic, and uses this to her advantage. 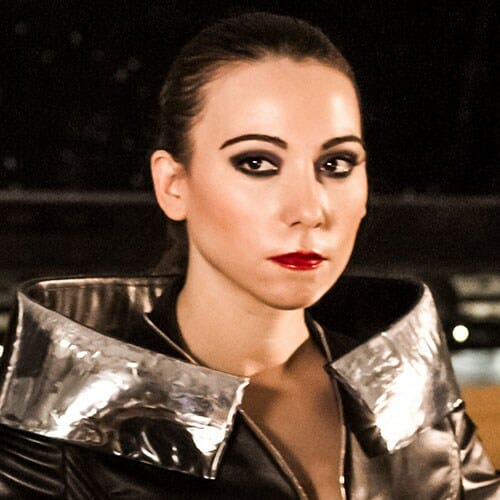 The bar’s mascot/pet is a strange furry creature named MOOFA, and innocuous fuzzy thing the size of a large boulder with no visible legs or head… just a long trunk or shout, like an anteater’s. Moofa moves slowly, making his meticulous circuit of the bar floor, vacuuming every corner with his snout. Moofa is a bottom-feeder, who eats all the dust, all the peanut shells, all the dropped wrappers and crumbs, no matter what its chemical composition. The bar is immaculately clean, thanks to Moofa’s efforts. 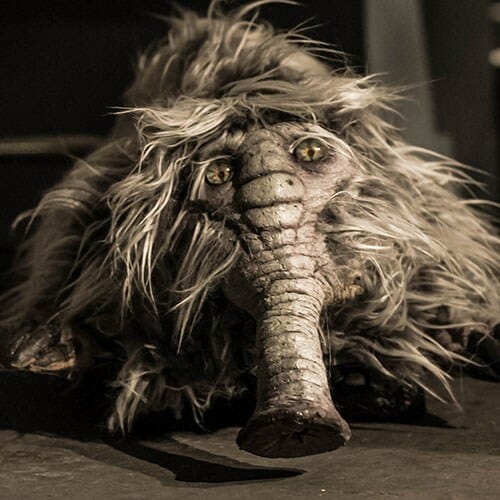 VRETCH, played by Douglas Tait, is a hawkish alien customer who enjoys nothing more than sitting at the bar and heckling Ken… think of the old grouch Statler from The Muppet Show, or Don Rickles.

He loves to wait until Ken is in earshot before he loudly tells Cozmo, “Hey, how many humans does it take to change a glowpanel?” Vretch is the first person Ken gets into a brawl with at the bar, and Cozmo gives the kid his “customer is always right” lecture. 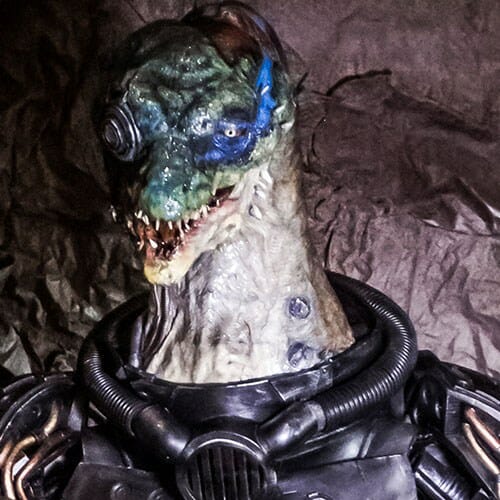 Wender, played by Robert Picardo, is the classy but harried manager of the local restor and casino, the Grand Cluster Hotel. He is always dapper and well-dressed, and arrives at precisely the same time every day to order his favorite “Nebula Swirl with Afterburner,” a drink that takes Cozmo fifteen minutes to make. But it never fails that there is an emergency at the hotel and Wender must dash off before he can take a single sip 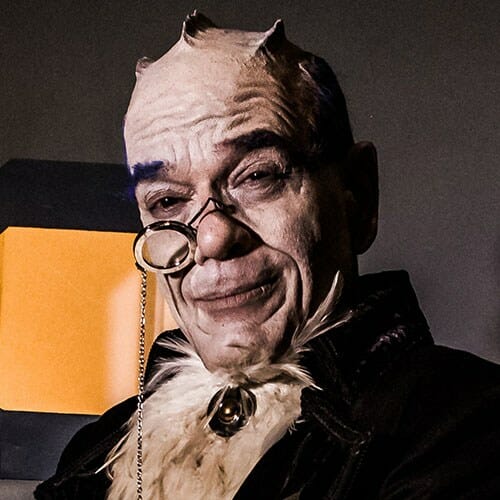