STAR TREK: OF GODS AND MEN

Forty years after their first mission, Chekov and Uhura, along with John Harriman, former Captain of the Enterprise-B, come together for the dedication of a very special ship. However, their reunion is cut short when they receive a distress call from an all-too-familiar planet, where they meet up with an almost-forgotten face, and in an instant something happens, or rather, doesn’t happen, that presses the three friends to embark on a mission that will forever change their lives… 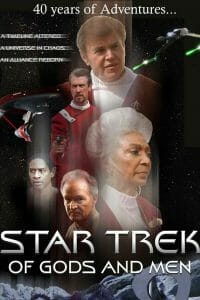 Producer Sky Conway and Deep Space Nine freelance storywriters Jack Trevino and Ethan H. Calk wrote OGAM. Director of photography is Doug Knapp. More than 50 film professionals (all Star Trek fans) have worked tirelessly to produce this labor of love! Originally released in three parts on the internet in 2008, this film is presented to you as a full 90 minute movie.